I finally succumbed to pressure and bought a REC TEC pellet grill. When I visit my sons house he has served some great food cooked on his so now I’m ready.

I’ve never been a big fan of yellowtail and always give them to my dive buddies, but I’m wondering if I should give them another try on my new toy. The thing produces a ton of smoke when the temp is set at 200 degrees so smoking is an obvious option. I’m not sure how many days in a row I want to eat smoked fish though. Is smoking and then freezing an option?

Any other recipe suggestions? I don’t eat raw fish.
email me at wsbhtr@cox.net

I like Sugar Brine on most things. It makes more of a Candy. Something you eat like a Jerky rather than make dip from. My all time favorite is the Striped Bonito.

Cut Filleted Fish into strips. Put a cup or two of Brown Sugar into a Ziploc with some salt and any spices you want to include. Don't add water. Give it a good shake up and leave in the fridge overnight. Next day take the strips out and air out a bit before you put on smoker. (to form a pellicle) Put on racks. I figure 200 would be somewhere around 2 hours. But each smoker has it's own heat.

This stuff never seems to stick around. But back in RI I used to freeze some of this for Winter and it worked out okay.

I cut it up on rice and salads, etc.... but really it dissapears fast.

Yes, you should experiment with your new grill. Yellowtail smoked on a pellet grill: 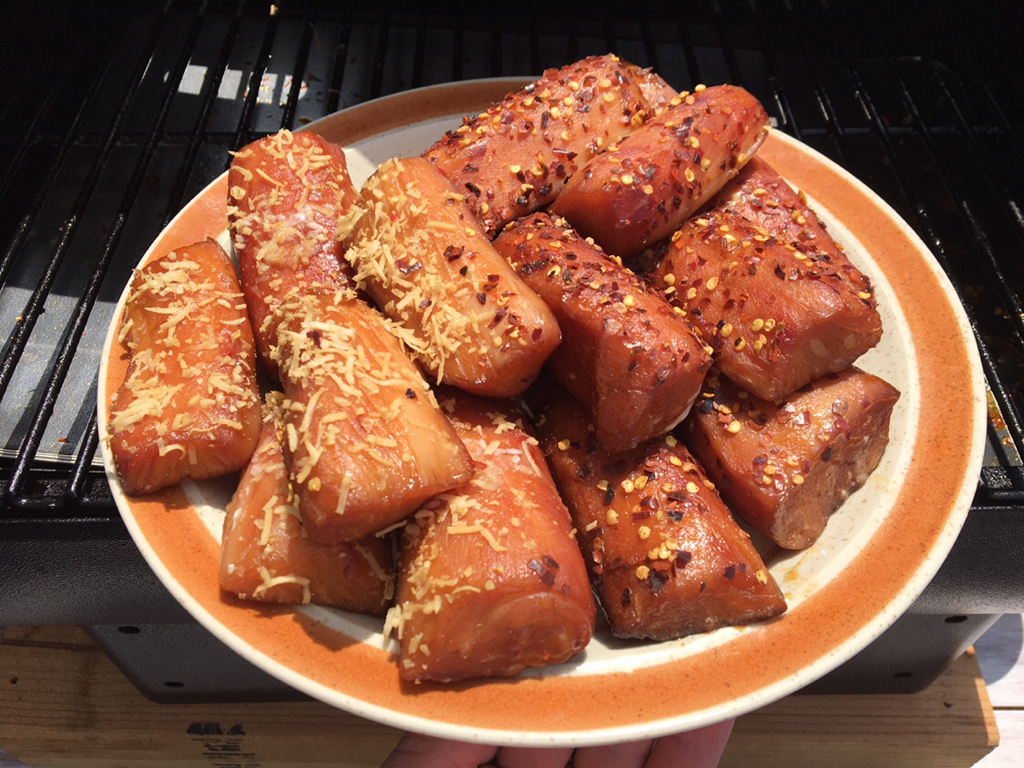 I dry brine like in the above post. I also saran wrap then freeze YT after smoking. It’s an easy thaw and makes a great appetizer or on-the-go picnic snack, and it pairs very well with wine which may make Nancy happy. Keeps quite awhile too.

Thanks guys. I’ve had good luck with a dry brine for salmon on my gas grill with hickory chips in a smoke box, and in fact I’m trying it for the first time on my Rec TEC tonight. Why not on yellowtail too? I’m using brown sugar, salt, pepper, allspice, mace and lemon zest. I got it from the NYT, which seems to be my primary source for recipes lately.

Now I’m trying to figure out how to adapt to the REC TEC. On the gas grill I just did about 5 to 7 minutes per side at something like until it looked done. But I have too much control on the REC TEC. I’m thinking I may start at 225 where it produces a lot of smoke, then crank it up to 375 until the temp probe says it’s done.

Now can someone tell me where to find a yellowtail in water clear enough to see it.
email me at wsbhtr@cox.net

Bill, I always use low heat for a longer time. It's important to air out the brined pcs before throwing into a hot smoker so it forms a little skin. After an hour I'll come back and paint on another layer or two of brine candy.. what you are trying to avoid is heating up the meats so much and so quick that they sweat off/out all the brine. I think with smoking 375 would be too high. Try a longer smoke at lower temp.

FYI I smoke all the way down at 160 +/- 15 deg and take it off when it seems right (not very scientific, I know). Amount of time depends on how big the chunks of YT are.

I second your request for the location of clear (sharkless) water with big dumb yellowtail swimming around.
On great days I shoot fish and on good days I spook fish

I think I’ve cofused the issue. If I ever get another yellowtail I will indeed go lower and longer. But I digressed into how I was going to cook salmon tonight. That recipe calls for rinsing off the dry brine, brushing with olive oil before just a few minutes per side on indirect heat on my gas grill and it works. It’s brown and crisp with a faint flavor of the spices and smoke and I just want to duplicate that result on my new toy.
email me at wsbhtr@cox.net

Bill McIntyre wrote:Now can someone tell me where to find a yellowtail in water clear enough to see it.