Finally got to hop in the water on 11/30 with a few of the Catch and Cook winners (Huan, Emmanuel, Charls and almost Matt). It was raining and cold in Pebble as we donned our wetsuits, "braving" (aka lots of whining) the cold 42 degree air. I was in a compressed 7mm Yazbeck suit which has served me really well despite the major need for an upgrade. The moment my face met the water, I nearly called it a day right then... It's not often your skin stings when the cold water hits it. I was surely missing Baja water at this point. However, I was elated to find visibility crystal clear in the shallows. We had a long surface swim to our spot (ditched the kayaks due to a forecast of 50kt gusts) but all the way out, the vis stayed on point. I could see the details of my gun at 25' and had a milky visibility all the way to 40'. It was going to be a good day.

I was super selective for the first 3ish hours and only pulled the trigger on a above average grassy and a large greenling. I did one drop on a deep crack and was surprised to find what I though was an abalone at first... it was a huge scallop and guess who forgot to pack their ab iron? I have a mono stringer with a pretty decent metal flopper on it so I pulled it out with my fish attached and tried to pop the scallop. It was cemented. I took 4 drops, no luck. Decided to do some hole hunting for a MFE I saw earlier and wanted to put Huan on since he said he had a killer recipe for it. Couldn't find it so I went back after the scallop. Finally, 3 drops later, and trying every angle I could get that little metal piece in for leverage, it popped. So stoked to see that it barely fit in the accordion pocket I had put on my suit - I knew it was big bc most of my scallops slide right into the pocket. It was rad to find out that Emmanuel also got several PB scallops on the dive (check out that orange one!)

I had 2 firsts on this dive. 1) I was in about 30 fow and saw a fat otter below me checking me out. It swam away. I made a couple drops and while on the bottom, it came up to me within 3' of me and held out a partially eaten purple urchin then disappeared again. On my next drop, it came back and held out a shell to me. Literal show and tell. Was kinda cute considering those things are usually pretty nasty. 2) I hear of people swimming with Mola Molas once in a while, but I finally got mine! I only saw one at first, but a few minutes later I was in a school of about 10 of them. That was super cool. I wish it wasn't so cold or I would have worn my GoPro. Next time.... no excuses - luckily Emmanuel had his rolling. Really cool to have a moment with some unique critters.

Diving with Huan was a lot of fun. He was willing to stuff himself into deep crevices for the nice scallops too, so we buddied up and just went after scallops, enjoying the great vis and generally just pumped to be out there. There is something neat and challenging about thinking "I bet I can wedge myself into that crack or deep into this cave, take a peak and hopefully not get stuck" and then going for it - those are the places I usually find the best stuff. We each got a few more scallops and I spooked another nice greenling that I took. It had been raining on us for the 4+ hours in the water and we were all getting really cold - so we called it and made the long swim back in.I love having a 5 gallon jug of hot water waiting for me. It's a huge comforter when you're really cold although even after my SurfFur changing station, in the cold rain, my toes were numb and tingling till well after I took a shower at home.

We had family come over the next night and I got to cook some tasties for them. 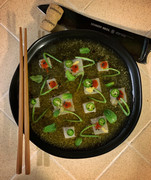 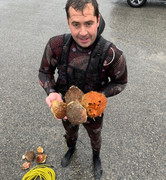 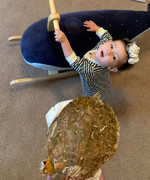 "The pessimist complains about the wind; the optimist expects it to change; the realist adjusts the sails." - William Arthur Ward I have a super scallop spot if you're ever it the area! I'd be happy to dive it with you, Bill

"The pessimist complains about the wind; the optimist expects it to change; the realist adjusts the sails." - William Arthur Ward